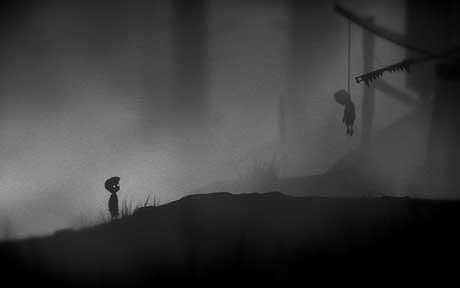 You know that feeling of being in a dream, where the world feels a bit out of focus, where everything is just a little out of reach, and where you have a sense of knowing that you have to go on but no idea why? Well, Limbo is sort of like that. I would go so far as to say that it’s a work of art, one whose its strength lies in its simplicity.

Limbo dates back to 2010, developed by the independent Danish studio Playdead (who have since brought out another, very similar game called INSIDE in 2016). It is a puzzle platformer, but nothing like you’ve ever seen before. In Limbo the player controls the protagonist, a little boy who wakes up on the floor of a forest. You don’t have any information about who he is or what he is supposed to do; you can’t even point and click at things. All you have are the arrow and alt keys to make him move, jump and interact with his environment, that is, push and pull.

The gameplay takes place in the aforementioned forest, a vile, menacing space. The forest is full of dark shadows and blurry shapes. As the boy goes deeper into this nebulous, murky world, he confronts untold dangers and seemingly insurmountable obstacles. But he must keep going—who knows where and why. This incongruity of a seemingly innocent little boy along among the concealed dangers of this surreal world is what gives Limbo its edge and you, the player, a chill down your spine.

The artwork is hauntingly engaging—silhouettes in shades of grey, used beautifully to convey a sense of depth. The cute-creepy little protagonist is but a solid featureless figure with two bright spots as eyes. The foreground in which the action takes place is also in dark silhouette, and lighter greys are used to convey depth and layers, while light streams in to create soft shadows and highlight dust motes, and underline that sense of dreaminess. But the softness of the environment is skin deep, for you don’t need to go too far to find the menace in Limbo. You must steel yourself to watch the little boy fall, and by that I mean die, and die in gruesome ways. There’s no blood, no mourning. He just gets up and tries again.

Death is serious in Limbo. Timing and the environment are all you have to bridge unpassable terrain, to keep going, to defeat the vile creatures that bar your way, and to bypass the deadly traps that will sever your protagonist’s limbs. Yes, the deaths can be grisly—you watch the kid getting snapped in two, decapitated, skwered by the legs of a giant spider; you watch him go limp when he falls into water, you watch his body crumple when he falls from a height. You don’t need graphic imagery to recoil when steel traps squelchily snap the little body into pieces or when all sounds stop as water engulfs the boy and he stops moving.

Gameplay-wise, there’s a fair bit of trial and error to get past certain sections, made a little bit harder because you know that every failure means you have to watch the grim death scene again. And, of course, the puzzles do get harder as you go on. Thanks to the short chapters, there are frequent autosaves, meaning that you don’t always have to redo a really complex bit that you just about managed after many tries.

Since I have yet to get to the end of Limbo, I don’t yet know what the story will unfold. It’s already one of my favourite games of the year and it’s still the first half of January.