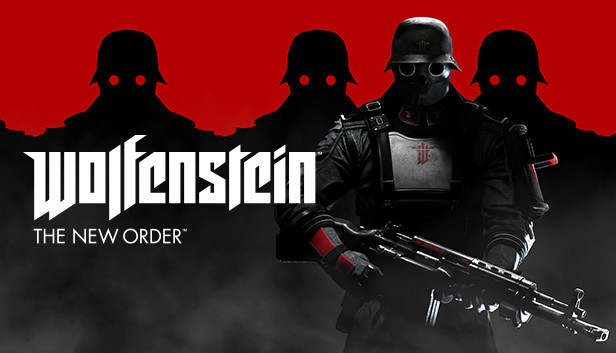 When it comes to gaming, it’s always been the story for me, right from the time of Myst and Riven almost 20 years ago. For the most part, give me a story and I’ll be hooked. Of course, the puzzle/discovery content is pretty important too, as is rolling about from cover to cover, sneaking up on or around the bad guys, and sometimes just taking a massive gun and shooting everything in sight.

There’s a lot of shooting everything in sight in Wolfenstein: The New Order (hereafter W:TNO), plus a decent amount of sneaking about if you so wish, but the overarching attraction of the game for me has been the premise its storyline is based on: What if the Nazis won World War II? Indeed, most of the action takes place in a 1960s world where the Nazis have been in power for a decade and a half, and things look very different. Hand in hand with the relentless pursuit of their master race propaganda, the Nazis have also had breakthrough technological advancements, including space travel. Famous cityscapes have changed in a way that you can identify them and yet see that something has gone wrong, very wrong. They also have at their disposal a variety of super-weapons. This means that during the gameplay you get to be chased down by gun-wielding robots the size of tanks, near-indestructible ubersoldaten and mechanical dogs that are anything but cuddly. Retro-scifi, someone called it. Hits the nail on its head.

Our beloved hero B.J. Blazcowicz returns as the main protagonist and the game’s only playable character. Back in Return to Castle Wolfenstein, which was the last game in the series I played, I seem to recall Blazcowicz as a bit of a brainless bullet-happy twit, but in W:TNO, we see a more fleshed-out character. Of course, he still a Nazi-killing machine, but he gets a few quips in, definitely gets to travel, including a trip to the moon, and also a couple of sex scenes.

The story begins in 1946, in the domain of General Wilhelm Strasse (also known as Deathshead). In the prologue, Blazcowicz and two of his colleagues are captured. During their escape attempt a decision has to be made as to which of the colleagues have to be saved, based on which the storyline splits (albeit only in terms of cutscenes). However, the survivors come to grief, and a serious head injury puts Blazcowicz in a coma from which he wakes up 14 years later, in 1960, when the world has changed. The game really gets under way from the time he escapes from the asylum—one of the things that reminds you that this is after all a story is that despite having spent the last decade and a half in a vegetative state, Blazcowicz remains a ripped, deadly, bullet-spewing machine, having lost none of his skills and reflexes—and joins up a flagging Resistance to attempt to take down the Nazis.

The gameplay mostly consists of disposing of various Nazi enemies, both human and robotic. But it isn’t all about breaking down doors and shooting everything in sight. As almost all reviewers and gamers have appreciated, W:TNO’s strength is its writing, not just the story, but the characters and dialogues as well. You fight your way through an asylum, explore underwater tunnels in a U-boat, sneak through a lunar colony (yes, you actually get to walk on the moon), inflitrate and escape a labour camp, sneak into a prison and more. There is not much of a learning curve to the gameplay—the usual FPS mechanics of figuring out how to move, hide, switch between weapons, reload, take cover, sneak, sprint and so on. There is a much-praised lean mechanism while shooting, but for some reason it doesn’t seem to work for me.

One thing I particularly love is that stealth is a major possibility in large parts of the game. It doesn’t seem possible to go an entire level only on stealth, but you can do quite a bit of damage, especially the ability to take out the “commanders” so they can’t call for reinforcements, thus reducing the amount of bloodshed you have to cause. The game’s perk system lets you unlock rewards depending on your play style, which is quite clever. The ability to change difficulty settings mid-level is also rather useful. I usually play on the “normal” setting to get the best of both the story and the challenge. W:TNO’s default “normal” is the third of its five difficulty settings, called “Bring ’em on”, and while it’s not terribly difficult, I have little patience, and have been known to turn it down to “Don’t hurt me” in order to either advance to a part of the story I’m much looking forward to or to get past a particularly tricky section I’m stuck in. Overall, the game runs really smoothly, with no lengthy waits between cutscenes and gameplay—in fact, the transitions seem almost seamless.

Oh, and I am delighted that this is a singleplayer-only game. No idiotic community messages to distract from your gaming pleasure (are you listening, Hitman?).

I still have two more chapters to go before I finish Wolfenstein: The New Order, but I know this is going down in my list of favourites. I mean, how many games let you sneak into a lunar space shuttle and walk on the moon?