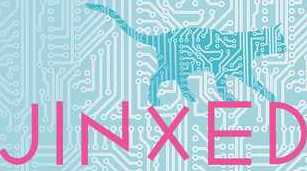 A round of applause to Amy McCulloch for a book (the first of a series) about girls in engineering. That and the the world-building were the two things that got me hooked on Jinxed, even though it ended in a cliffhanger, which I hate.

The story is set in a time about 50 years from now, when animal bakus (robotic companions) have replaced mobile phones, and society, at least in this urban Canadian landscape, is a closed hive of constant immersion and surveillance, all thanks to the capitalist hegemony that controls everything. These dystopian aspects were not exactly explored, though I hope McCulloch is keeping them for future books.

As for the story, here’s the blurb:

Lacey Chu has big dreams of becoming a companioneer for MONCHA, the largest tech firm in North America and the company behind the baku, a customisable smart pet that functions as a phone but makes the perfect companion too. When Lacey finds out she hasn’t been accepted into Profectus, the elite academy for cutting-edge tech, it seems her dreams are over. Worst of all, rather than getting to choose one of the advanced bakus, she’s stuck with a rubbish insect one. Then, one night, Lacey comes across the remains of an advanced baku. Once it might’ve been in the shape of a cat but it’s now mangled and broken, no sign of electronic life behind its eyes. Days of work later and the baku opens its eyes. Lacey calls him Jinx – and Jinx opens up a world for her that she never even knew existed, including entry to the hallowed halls of Profectus. Slowly but surely, Jinx becomes more than just a baku to Lacey – he becomes her perfect companion. But what is Jinx, really? His abilities far surpass anything written into his code or built into his motherboard. He seems to be more than just a robotic pet. He seems…real.

Lacey was a protagonist easy to get behind, even though things happened way too easily for her. This was the weak point of the book, the coincidences. There were a few other things I found trite – the plot, which was the stereotypical rivalry between our poor underdog (but brilliant) narrator and the spoilt (but also brilliant, if marginally less so) son of a bigshot father. In the end, Carter came off as more of a caricature than an antagonist to be feared.

The other letdown was the ending, not the cliffhanger itself, but the final reveal. After McCulloch’s fascinating set-up, the big reveal was too simplistic. As was the idea that a big corporation had the welfare of people as its primary agenda, but I’m sure that’s down to a 15-year-old’s starry-eyed PoV.

Then, the Baku Battles – I was not a fan. It was a kind of Hunger Games-type reality show, but for bakus, controlled by their owners. Didn’t quite ring right for me as either a learning assignment or as a top-secret incentive to get students to be creative. Surely there were better ways to have achieved that.

Finally, what really bothered me was that there were also way too many boys/men than girls/women. There were absolutely no women in power or any that took centre stage, even though the principal of the school was a woman and so was the head of the capitalist giant Moncha. In the end, neither of them counted; one quite the opposite. The fathers were more important than the mothers, even though Lacey had only a mother at home. The one adult that helped Lacey and her friends was a man too.

I wonder if this is an unconscious “balancing” out that happens when the main character is female. I am quite attached to this theory because I’ve seen in my own writing (I’m working on getting rid of it, of course). Basically, since we’ve internalised the skewed representation in media in general, and conditioned to give male voices more weight, we end up overcompensating when female characters are given the metaphoric mic. This isn’t conjecture; there have been studies about this. Gina Davis, in an interview with NPR Radio in 2013, said in the context of television, “If there’s 17 per cent women, the men in the group think it’s 50-50. And if there’s 33 per cent women, the men perceive that as there being more women in the room than men.” (This might be the study she was referring to, but I don’t know for sure.)

Last word: Despite all the moaning, my overall impression of the book was positive. I loved reading about a girl who was a brilliant tinkerer and I particuarly enjoyed seeing how the author had imagined our world in 2067. I am curious how she intends to take the story foward. I would suggest reading it if you like MG/YA sci-fi.