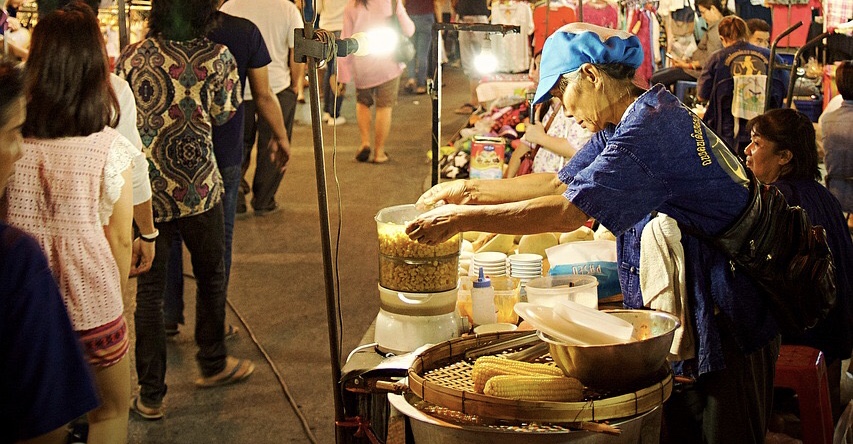 Every weekend, Chiang Rai closes one of its main streets to traffic and converts it into a pop-up market. Food and drink, handicrafts, clothes, trinkets, art, toys—there’s a lot of it about. The walking street, as they call it here, is not to be confused with the night market, which is about half a kilometre away (you can walk from one to the other, but give yourself a good two or three hours at the walking street.

Food-wise, the most fascinating stall was one where they sold crispy fried insects and larvae. No, I didn’t try any. Yes, I wanted to but lost my nerve. I did try some coconut water, mainly to quench my thirst after a couple of hours walking around the market. This was my second coconut of the day and was, for the second time, amazed at the sweetness of it. I suspect there was some sugar added to the one in the market, but at Museflower they don’t use sugar.

Speaking of which, to top off yet another fantastic food-filled day at the retreat, I asked for a banana coconut smoothie. I had expected the banana and coconut flavours to blend well together, though I was unsure what the eventual result would be. What I didn’t expect was to be served a banana smoothie inside a coconut!

The soft insides of the coconut and banana were blended with yoghurt (no added sugar), plans there was some coconutty pulp still left inside, which I could scrape off with my straw. And I was right, bananas and coconut complement each other beautifully!